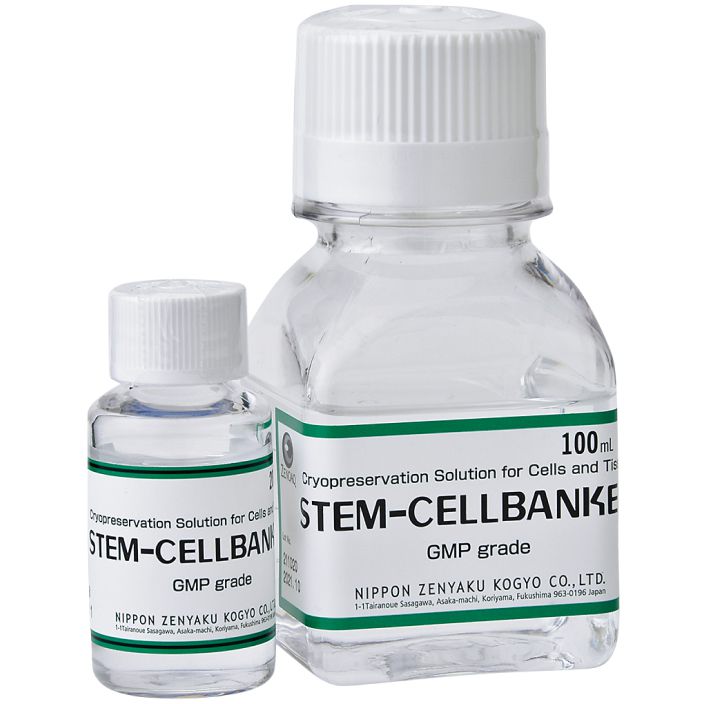 Description:
STEM-CELLBANKER® is a chemically defined freezing solution with optimized formulation for stem cells and iPS cells storage as well as other valuable cells. Furthermore, recent data supports it's ability of cryopreservation for tissues. It is completely free of serum and animal derived component, and contains only USP, EP, JP graded ingredients or JP excipients. It is ready-to-use with simple protocol while provides a safer and promising cryopreservation of stem cells and iPS cells.
STEM-CELLBANKER® GMP grade is manufactured in a facility compliant with JP, EU, US and PIC/S GMP guidelines and the production and the quality are controlled in compliance with JP GMP guidelines.
Advantages:

※This product has been registered in MF within PMDA in 2013 and BBMF within CBER (Center for Biological Evaluation and Research)/FDA (the U.S. Food and Drug Administration) in 2013.

① Cryopreservation analysis on hESC and iPS cells with STEM-CELLBANKER®

By Department of Clinical Science, Intervention and Technology, Karolinska Institutet

＊We are deeply grateful to Prof. Outi Hovatta and Ms. Frida Holm for above analysis.

Result: Cell viability as high as or more than 95% for MSCs and 90% for EPCs was observed while cell proliferation ability and differentiation ability were maintained in tested cells.
For details, see MSCs or EPCs

＊We are deeply grateful to Prof. Osamu Ohneda and Dr. Masumi Nagano for above analysis. 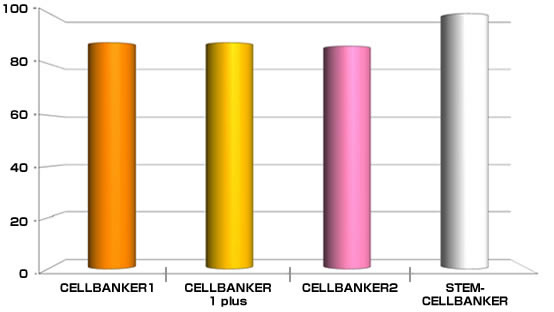 For optimum results, cells for cryopreservation should be in log phase of growth. Similar or standard freezing protocols may be substituted.

IMPORTANT: Optimum protocol may change with the cell types. 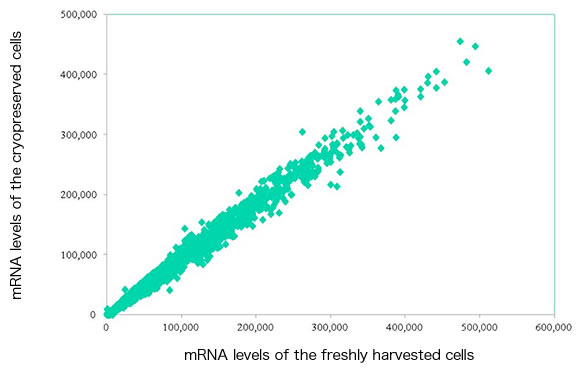 Total RNA was extracted from the cells of a mouse lung fibroblast cell line either immediately after harvesting or after cryopreservation with STEM-CELLBANKER at -80°C for one week and thawing. mRNA levels in the two samples were compared DNA microarray analysis, and the results showed that 93% of mRNAs was within the range of + 1.6-fold difference.

Storage and Stability
Store at 2 to 8 or below -20 degrees Celsius. In unopened condition and under storage temperatures (2-8℃ ), the product will be stable for 3 years after the date of manufacture.

Disclaimer
STEM-CELLBANKER® GMP grade is not itself a pharmaceutical. Therefore, ZENOAQ and ZENOGEN PHARMA make no warranty, express or implied, as to the fitness and suitability of this product for any particular purpose and/or merchantability unless the use is intended for research.